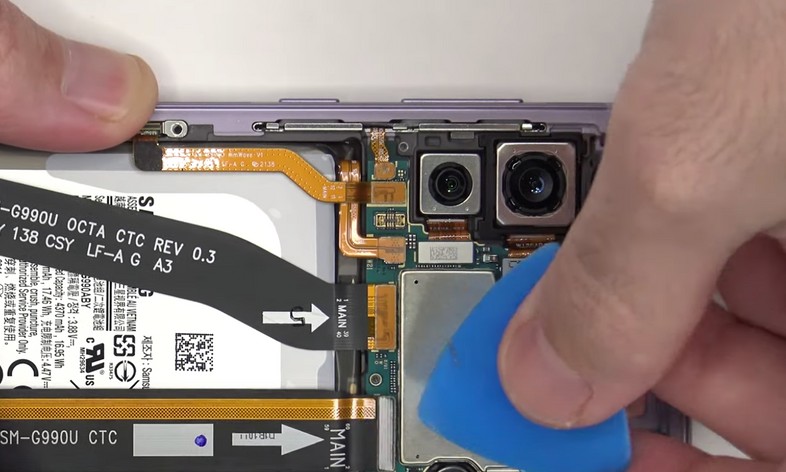 The first element you notice is the rear body, entirely in plastic. Once removed – and the operation does not seem particularly difficult, since this material is less subject to breakage than glass – the mainboard is accessed, protected by a graphite film to facilitate the transfer of heat to the outside. There are many screws, as well as the glue that holds the front camera still: be careful if you have to replace it because doing damage risks being too easy …

On the sides there are the 5G antennas – the model subjected to teardown is also equipped with the mmWave ones – and, once the mainboard has been removed, the three rear cameras can also be extracted: 12MP the main wide-angle (with OIS), 12MP the ultra-wide-angle and 8MP the tele (with OIS). Another “problem” is the eventual removal of the fingerprint sensor integrated under the display: the adhesive that holds it in place must be carefully removed. And there is also some adhesive under the battery: once again, it is good to be patient and use isopropyl alcohol to be able to extract it without too many problems.

The last tip of the video concerns removing and replacing the display: it will be necessary to remove the rear body, many screws, and some components – as well as other adhesives – to gain access to the screen. All in all, however, these are feasible operations – at least by those in the know – and PBK gives the smartphone a repairability rating of 7.5 out of 10.