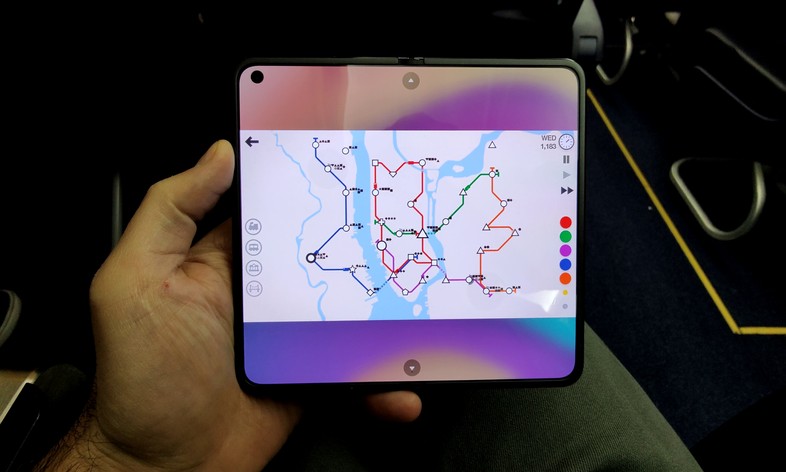 Foldable smartphones aren’t for everyone, at least for now. The offer is still limited and the solutions on the market are very similar, and although they represent the natural evolution of smartphones, they meet the needs of a niche of users, highly suspicious and tired of the usual design. Premise due, otherwise it seems that the enthusiasm shown for these terminals pushes us to “recommend” them in every context.

Unfortunately, this is an Asian model with provisional international software, a trick found to let the device be tested even outside Chinese borders ahead of time. It is therefore difficult, to sum up, and give an all-around judgment, for this reason, we are not in front of a review and at that point, we will only get there if and how much Oppo decides to officially bring the Find N also in our parts.

The context was the right one: a week of travel between long journeys and smart working, perhaps the best scenario to take full advantage of the “double format”. It therefore seems obvious to say that Find N proved to be a perfect companion over the many passages I had to face, between planes, trains and buses. Large and bright screen, well-reproduced colors and few reflections for the category, I’m only sorry for the inevitable black bands on Netflix and other platforms now focused on content in 16: 9 or 21: 9. Here we have an atypical form factor (8.4: 9) that transforms the smartphone into a square tablet when open, very convenient to consult two apps at the same time and thus have two columns without many compromises.

The other good news is that it doesn’t consume that much despite its size and dual-screen, the Snapdragon 888 has been tamed properly to provide the computing power it takes to keep everything running smoothly. No folding still boasts record batteries and perhaps it is better this way, also because the weight is supported and going further would really be a gamble. I managed to close normal days without problems, taking advantage of both displays and taking an average of many photos and videos.

I appreciate the engineering work done on the hinge, as precise as few and able to offer a clear feeling of safety; no creaking, no uncertainty. It immediately snaps beyond a certain degree and looks more than solid, light years away from the first (inevitable) attempts of the first models made by the competition. The mechanism is increasingly refined and on Find N it is just a pleasure to “trigger” it.

To make the most of such a device, shortcuts and ad hoc software solutions, such as for example, are essential the “Split Screen” which allows you to divide the main screen in two with a simple swipe. I have never been a lover of multi-windows on smartphones, the narrow diagonals of the displays almost never allow an efficient use of several things at the same time. In this case you have the right format and the simple gesture facilitates everything, you end up using this mode a lot compared to the others; It will then be necessary to understand what will arrive in Europe also on the software front. 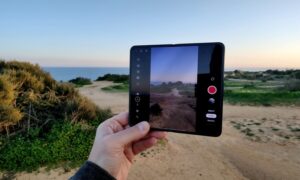 The winning team does not change, some would say, and I repeat it too, given the excellent feedback received in the last year with the main camera of the 50MP Find X3 Pro that Oppo has also integrated on Find N. Zero differences, the same module, and hardware platform, we are simply in front of one of the best mobile solutions and this opens up to all-around fruition.

There remain the “limitations” in terms of video capture, with the choice to focus on a well-stabilized 4K even at 60fps and go no further with the resolution. Compromise with which I found myself more than good and has never represented a real bottleneck, even during filming done for work reasons. Do you want an example? The video you see at the beginning was entirely shot with this Sony IMX766 image sensor, but for obvious reasons it is that of the Find X3 Pro. There would have been no difference if I had used the Find N, only I would not have had it with me. in this chat on the streets of Albufeira. Here are some shots

As already mentioned, the wide-angle lens changes, ace in the hole of the Find X3 Pro which here is resized for some reason and replaced with a Sony IMX481 16MP image sensor. Little to complain, the results are still more than good. In the second gallery below you will find instead of the shots taken with the zoom camera, the same as the 13MP Find X3 Pro with aperture f / 2.4 which boasts a respectable 2x optical.

Then there are two other front cameras, although it is not necessary to use them e on the other hand, the rear three can also be used when open, looking at what we are framing on the external display. Not a small advantage, just click on the icon at the top that activates this mode.

The limits of the format remain and are however tangible: those who love small and light smartphones will always turn up their noses. Although the Find N is in fact the smallest “Fold” on the market, the fact remains that when closed it is 1.6 centimeters thick, therefore almost an inch more than the thinnest on the market, and it feels right in your pocket. The feeling is exactly that expressed ironically on the cover of the video, that is an iPhone 13 Mini sandwich; the quote is due given that it is one of the very few smartphones with a 5.4-inch display (very similar to the external one of the Find N).

The weight is also sustained and this has left me a bit perplexed. Why isn’t this foldout lighter than its larger Samsung counterpart? Difficult to have a precise answer, even the Oppo model would score 4g more than the Z Fold 3 on the scale (275g against the 271g of the Samsung) and the only slightly larger battery does not explain the mystery (4.500mAh against 4.400mAh). The materials are chosen for the body and the hinge will be weighed, a complex system that on Find N counts as many as 136 components. The fact remains that it is a heavy device, which offers a lot but makes itself felt.

I would have liked to try it with a “definitive” software that showed all the advantages of the form factor, instead I had to settle – like everyone else – with ColorOS 12 on Android 11, a hybrid created ad hoc for non-Chinese media. It is therefore difficult to answer all the questions and curiosities, we will necessarily have to return to them once Oppo has decided to bring the Find N to our market, assuming that this will never happen.

I am confident, who knows if the Chinese house will decide to update the device already during the year and bring the second version directly. Oppo, on the other hand, is certainly not shy in carrying out hardware refreshes in a short time. The first attempt at a leaflet – removed the Oppo X 2021 with the screen that unfolded – is certainly more than concrete, has its own precise identity and also answers the question of many who would like to approach the category without making too many compromises. If you look at it closed it looks like a normal smartphone, certainly a double smartphone, but at least these are the features and you avoid the remote control effect. Good the first.