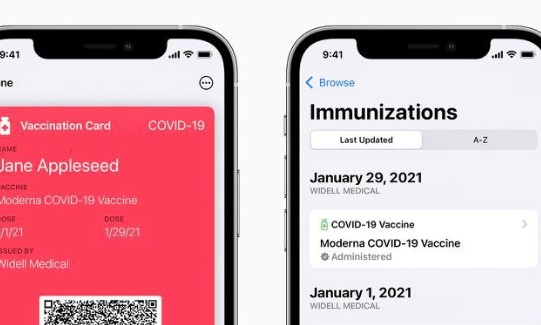 With iOS, you can natively insert the vaccination certificate in the iPhone Wallet and the Health app. This new feature is already present in the first beta of iOS 15.4 that Apple has released in the past few hours to developers.

To upload the Green Pass, proceed as a normal QR code: just open the Camera app, frame the QR code of the certificate, click on the yellow notification that is shown, and then on the “Add to Wallet and Health” button on the screen which is opened.

The data that is shown in the Wallet app relates to a person’s name, surname, and date of birth, the type of vaccine they received, the date each dose was administered, and the issuer as well as the digitally-signed QR code. More detailed data can be accessed via the Health app from which you can also delete everything.

At the moment, the function would appear to be partially available in Italy. Trying to scan the Green Pass the certificate is added only in the Health app but not in the Wallet as the data would not yet be “verified”. Apple’s release notes state that too “Certificates issued by Switzerland, Liechtenstein, Cape Verde, North Macedonia, and Palestine currently cannot be verified or added to the Wallet app on the iOS 15.4 beta.”

Apple initially offered the US only the option to add the COVID-19 vaccination certificate to the Wallet and Health app, with the release of iOS 15.1. Starting from iOS 15.4, at the end of the beta testing phase, support will therefore be extended to many European countries.