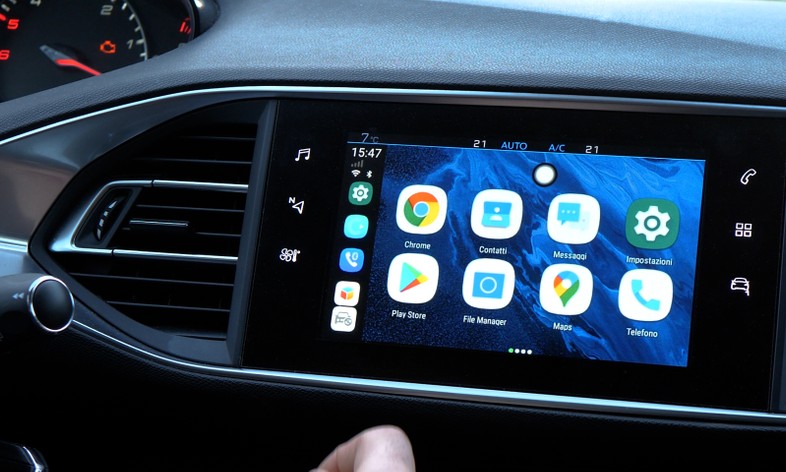 The infotainment systems of modern cars are increasingly advanced and powerful, increasingly large and defined displays but it certainly cannot be said that (with rare exceptions) they will be exploited to 100% of the possibilities. For example, in most cases, it is in no way possible to use the screen to browse online, watch a movie on Netflix or even play by connecting a controller via Bluetooth, and in this sense Android Auto And Apple Carplay they add much less than one might expect.

Notwithstanding that car are designed with safety in mind is that of course, it is unthinkable to get behind the wheel while watching the latest episode of “La casa di Carta.”, why not equip your vehicle with something truly smart and usable in various situations in complete safety?

Precisely with the idea of ​​maximizing the potential of displays equipped on cars, those of Carbotics Tech came up with a nice gadget called Carplay2Droid-4G: just connect it to the car’s USB socket and that’s it, the interface of an Android mini PC will appear on the screen of the integrated system, with which you can do everything.

Carplay2Droid-4G it is so-called because it uses the Apple CarPlay platform to convey an Android mini PC (or a tablet, always a full Android one) on the screen, while “4G” suggests the possibility of inserting a SIM to make the internet connection independent.

Carplay2Droid-4G looks like a small black plastic box and perforated rear part to facilitate heat dissipation, it is very small and light, as well as thin (approx. 80x80x10 mm). They are available there Type-C port for connection with the car, a slot for memory expansion with microSD, and a slot for inserting a nanoSIM. The power supply comes from the USB connection with the car and the cable is supplied in the package, together with a Type-A / Type-C adapter. 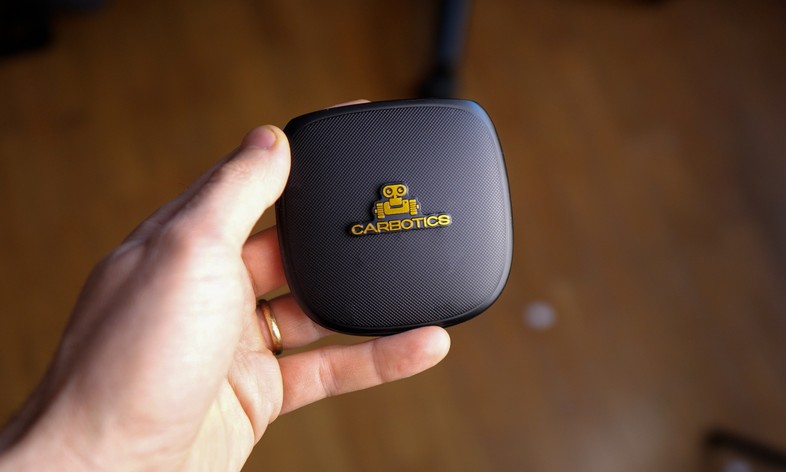 The installation is trivial, it is a plug and play device, just plug it in and you’re done, the car will recognize it as an Apple device compatible with CarPlay.

The technical characteristics are not bad at all, so much so that even in terms of performance, the Android box performs quite well. You clearly cannot be expected to play Genshin Impact at 60 fps, but all in all, there are no stumbling blocks or lag in the main apps to be used in the car (Waze, Spotify, Google Maps for example) and even films and videos run smoothly.

HOW DOES IT WORK

Once started you will find yourself in front of the classic Android interface of a tablet or a mini PC, with some changes (well done) to improve the interaction with the car systems and a series of pre-installed applications.

The interface takes full advantage of the diagonal of the display, there is no annoying black bar with navigation keys that is often found on systems of this type, and to move around the system you can use the touchscreen and retractable navigation keys that are activated via a floating button.

Alternatively, if the car is equipped with one, it is possible to take advantage of the hardware buttons of the infotainment system. In our case, we have verified with a Peugeot 308 that it is possible to move and scroll through the lists with the selection keys on the steering wheel.

On your car you will therefore have a Full Android mini PC, that is, equipped with PlayStore from which you can download any application, keyboard, settings, memory management, multitasking, and everything that is normally found on a tablet or smartphone.

With YouTube, Netflix, Prime Video no problem in multimedia playback, the audio comes out directly from the car speakers but nothing prevents you from connecting the box via Bluetooth to a pair of headphones or other devices; Google Maps and Waze work perfectly, however, not in the Android Auto / Apple Carplay version but in the full version for mobile devices, a generic error appears on Spotify but just ignore it and then everything goes smoothly.

Thanks to a specific function it is also possible to open two applications on split-screen, which will be resized accordingly, for example, Waze and Spotify or Maps and YouTube Music.

Online browsing is also good, with Chrome but also with one of the many alternative browsers on the PlayStore. Finally, with excellent telephone reception and above all GPS, you can easily navigate with Maps or Waze without problems related to geolocation which, we remind you, does not happen through the smartphone but thanks to the chip integrated into the box.

WARNING: Improper use of this device is extremely dangerous for your safety and that of others, as well as being illegal. As is very clearly stated in paragraph 2 of article 173 of the highway code, recently modified to extend the ban on the use of mobile phones to other devices as well.

It is forbidden for the driver to use radiotelephones, smartphones, laptops, notebooks, tablets and similar devices while driving, which involve taking their hands off the steering wheel, even if only temporarily, or using headphones, with the exception of vehicle drivers. of the Armed Forces and Corps referred to in art. 138, paragraph 11, and of the police. The use of hands-free devices or devices equipped with earphones is permitted provided that the driver has adequate hearing ability in both ears which do not require the use of hands for their operation.

$ 1 million question: if the USB socket is occupied by Carplay2droid-4G, how can I use the telephone functions connected to my smartphone?

Fortunately, our dongle has been thought out well, so it provides well two ways around this problem. The first is the connect the phone to the Android box via Bluetooth, you will then find an app pre-installed that allows you to manage calls and contacts on the connected smartphone. Once the first pairing has been made, the connection will take place automatically and it will be possible to take advantage of the car system (microphones and speakers) by passing through the Carbotics box, essentially it will work automatically and you will not find any differences compared to use with Android Auto or Apple Carplay.

The second way is a bit more complex and unexpected but unlocks further possibilities of using the box. Through the SpeedPlay app, it is possible to use Android Auto and Apple Carplay Wireless. Just activate it and the smartphone will recognize the availability of a wireless connection, after a quick association with the WiFi Hotspot network created by the Android box it will be possible to fully exploit the platforms but without wires.

The only drawback is that if you are using a smartphone hotspot connection to a network the Android box, each time Speed ​​Play is enabled the process will be a bit slow and laborious because CarPlay2Droid will have to disconnect from the hotspot and create itself a network to which the smartphone will, in turn, have to connect. All this is solved by using a data sim inside the box, so as not to have to resort to sharing the network with the smartphone.

Speaking of Internet connection, the possibilities are essentially 3: nanoSIM with data traffic to be inserted in the box, or hotspot from the smartphone to share the connection. Or again, if your car has one, you can take advantage of the internal WiFi network provided by the data card installed on the car.

We arrive at the painful notes of Carplay2Droid 4G, to it it is a project in the campaign phase on Indiegogo founding should end in these days, after which the placing on the market should start.

At the moment, shipping excluded, Carplay2Droid 4G is offered at 176 euros, a price that is not exactly popular given the mechanisms of crowdfunding and the super limited availability (2-3 pieces in stock), a price that should still rise further at the end of the campaign.

In short, nice gadget but expensive, perhaps more a whim for a few enthusiasts, even if it should not be forgotten the extreme ease of installation which really makes it for everyone and the smooth operation that we have found, with excellent fluidity in all situations.