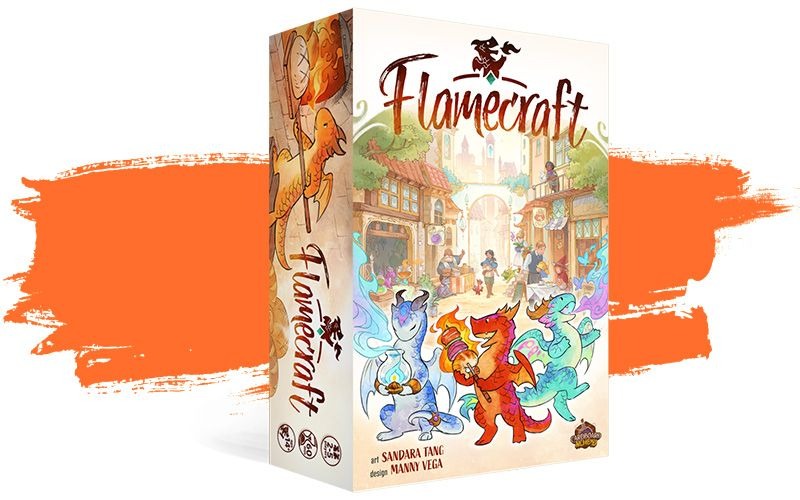 On paper, Flamecraft is not that different from other worker placement and resource management games. Another game in which you manage resources to earn money and other things that in the game will give us VP. The game proposes some interesting things that I would like to comment on and surely that is how you understand that, after this explosion of “cute” art, adorable hearts and dragons, it hides a simple game with very striking mechanics.

On Flamecraft we have to be a Flamekeeper. An expert in dealing with dragons who must choose the best place to assign each task in town. As dragons are assigned to the shops they improve and, when these shops are full, others will be opened throughout the town. In this way, we will increase the alternative of things to do.

It is one of those games where there is no maintenance and the games gain appeal as they progress. Apart from all this, it has a very striking production and the price (at least in the KS campaign) was quite striking. I made a preview in which he reviewed his mechanics before getting to try it and after trying it surprised for good.

The Flamecraft Announcement is not the only one coming from Maldito Games in this December Newsletter. They also just announced, a fully cooperative 1 to 5 player board game that had several awards for the best card game at the UK Game Expo 2020. In Solar Storm you are a member of the crew aboard a drifting ship that receives each time more damage from the gravitational pull of the sun, you are trapped and time is running out. On Solar storms, players must repair the ship while working together to survive.

From what I understand it is a very well-considered game among solo and 2 player games, climbing much worse the more people there are at the table. The announcement of Solar storm maybe it opens the possibility that Cursed is encouraged to publish, a board game from the same publisher that I quite liked when I tried it.