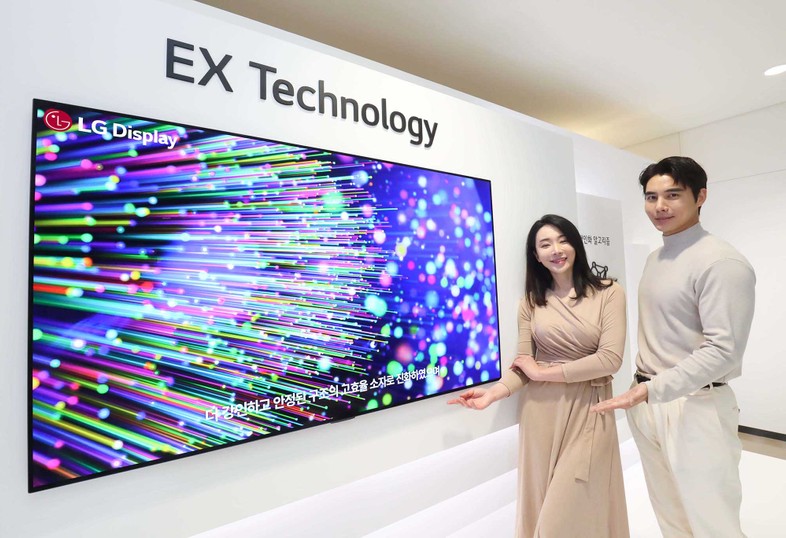 LG Display announced a new evolution of the OLED TV panels: the OLED EX. The new generation is the next step to the OLED Evo launched in 2021 on the G1 series. “EX” stands for “Evolution” and “eXperience” and serves to represent the goal pursued by the Korean giant: to provide consumers with new experiences through the continuous evolution of OLED technology.

LG claims the new panels are capable of increasing the brightness up to 30% more compared to a conventional OLED screen. To achieve this result, we worked on two levels: le organic components And new algorithms for artificial intelligence. Regarding the structure of the panels, LG Display declares that OLED EX uses for the first time organic elements in deuterium instead of those based on hydrogen. This change had already been associated with the Evo panels when the first rumors about the changes made were circulated.

The choice of deuterium is related to its ability to increase the brightness of the screens while maintaining high efficiency in the long term. To use it, however, it was necessary to optimize the process to extract it from the water and apply it to organic emitters. The press release does not specify which types of emitters it was applied to: however, we know that last year the use of deuterium was indicated concerning blue emitters, those that traditionally are less efficient.

The benefits guaranteed by the organic components to deuterium are then combined with the contribution offered by the so-called “machine learning” (here we explain what it is and how it works). A set of custom algorithms allows OLED EXs to have more control over the panels. Artificial intelligence can predict how the self-emitting pixels of OLEDs will be used by operating on displays with a resolution of up to 33 megapixels, i.e. 8K.

Machine learning learns individual vision patterns (so let’s assume you analyze how TV is used) e controls the supply of incoming energy to optimize more accurately the color rendering and all the details present in the source. In simpler words, artificial intelligence manages the power supply for the luminance peaks more effectively, to take full advantage of the improvements made to the panels.

The OLED EX will finally have a design improved: we talk about bezels reduced from 6 to 4 millimeters on a 65 “model, about 30% less. LG argues that the effect is greater involvement. When will we see the first TVs on the market? Obviously, LG Display does not speak directly about the models since it takes care of making the panels. However, the deadlines stated provide us with some indications: the new technology will be integrated on all OLED TVs produced in Paju in Korea and Guangzhou in China starting from the second quarter of 2022.