Google has made official Android 12 (Go edition), the variant of its most recent version of the smartphone operating system optimized for entry-level models. The Android (Go edition) project started in 2017 and today has a base of over 200 million active users. The new version of Android Go arrives more than a year after the previous one and rests on three main pillars: speed, functionality yet smarter, and a further improvement of the measures introduced to ensure the privacy of users. There is no shortage of optimizations introduced to meet user needs multilingual and to contain the data consumption and extend autonomy. 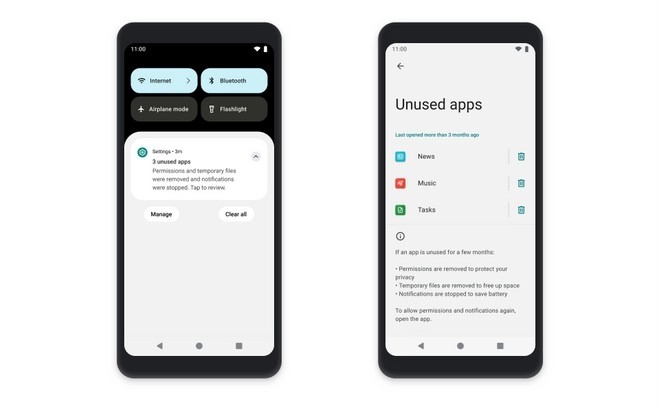 The new version of the operating system will be integrated with the entry-level smartphones that will arrive on the market in the course of 2022. In the meantime, the main innovations can be summarized as follows:

On Android 12 (Go edition) smartphones apps will open 30% faster compared to the previous Android 11 version (Go edition) and with an improved animation. Google has developed the theSpalshScreen API so that all developers can deliver the smoothest app opening experience possible. Google says it will be a practically instant opening and documents the loading time of apps on Android 11 (Go Edition) the new version 12 with a short comparison:

The new version of the operating system will offer greater autonomy And will manage your storage more wisely hibernating apps that are not used for extended periods. Smartphones with limited storage capacity will therefore also benefit. The Files Go app will then allow you to recover the files within 30 days of deletion thus allowing the user, in the meantime, to delete unnecessary files.

Android 12 (Go edition) improves the use of content. By switching to the recent app’s screen, you will be presented with options to listen to the news and translate any content on the screen into your preferred language.

Google has improved the operating system sharing functions: users will be able to first share apps directly with nearby devices, with a consequent saving of data consumed for downloading.

Also sharing your smartphone with friends and family will be easier. Google has improved the experience of using the guest mode, making available I profile directly on the lock screen. You can then switch to a guest profile before sharing the device and then reset it once sharing is complete.

Android 12 (Go edition) will provide information even more transparently about apps that access user data; It will also give you more control over how much private data apps can access. To achieve these goals, Google has developed a new dashboard dedicated to privacy: the user will immediately understand which apps have access to sensitive data – for example those acquired from the smartphone’s microphone – and will be able to revoke the permissions, if necessary.

On the status bar also is positioned a new indicator that Reports when the apps access the microphone and camera. Android 12 (Go edition) also allows you to limit the amount of data shared with apps, granting permissions to read the approximate location user instead of the exact one; this function can be useful, for example, to continue using a weather app that will continue to provide accurate forecasts even without knowing the exact location of the user.