An evening like many others, while sipping a glass of his favorite whiskey in his beautiful Milanese home, Carlo Monterossi is disturbed by the sound of that video intercom that he never wanted to know was working. But at the door, instead of a bellboy, he finds a guy with a covered face and a gun. Small. Chromed. With a black hole facing him.

Thus began the adventures of Monterossi, from a missed encounter with death, in which he is saved only by chance (and by the heaviness of that crystal glass that he forgot to place on the table). This is the call of fate that prompts him to investigate. Partly because he is afraid and has to understand who wants to kill him; partly because he has reached a point in life where the temptation to take stock is tempted: love is only the memory of a woman who has gone away, the work of a TV author brings him money and a little of fame, but many crises of conscience and the desire to leave. A successful unhappy ironic. He has only his beloved Bob Dylan left, the only one who can give voice to his nostalgia, to find the words; and an inescapable desire for justice. The same one that moves Nadia and Oscar, his two young helpers borrowed from the world of TV, and that handful of cops who will end up collaborating with Monterossi.

Detective by chance, out of anger and human curiosity, always poised between ironic indolence and blues yearning, in his search for the truth Carlo Monterossi will have to confront a couple of cultured and professional killers, two gypsies looking for revenge, collectors and smugglers of Nazi-fascist souvenirs, incredible exchanges of person, a woman who seems to have lived several times and a cruel past that returns and leaves indecipherable clues behind.

Based on the novels of Alessandro Robecchi published by Sellerio, the series is directed by Roan Johnson and written by Roan Johnson, Davide Lantieri and Alessandro Robecchi and is produced by Palomar. In the cast Fabrizio Bentivoglio, Diego Ribon, Donatella Finocchiaro, Martina Sammarco, Luca Nucera, Tommaso Ragno, Bedlù Cerchiai, Beatrice Schiros, Marina Occhionero, Maurizio Lombardi, Gabriele Falsetta, Ilir Jacellari with the participation of Maria Paiato, with the special participation of Michele Bravi, with the extraordinary participation of Carla Signoris.

As We See It is an eight-episode series that follows the stories of Jack (Rick Glassman), Harrison (Albert Rutecki), and Violet (Sue Ann Pien), housemates in their early twenties all on the autism spectrum, as they struggle to getting and keeping a job, making friends, falling in love and navigating a world that avoids them. With the help of their families, carers, and sometimes even lending a hand to each other, the three roommates face setbacks and celebrate triumphs on their very personal journey to independence and acceptance. The series features Glassman, Rutecki, and Pien, all of whom identify as individuals on the autism spectrum. The cast of the series also includes Sosie Bacon as assistant Mandy, Chris Pang as Van, Violet’s brother, and Joe Mantegna as Lou, Jack’s father.

From 21 January exclusively on Prime Video.

Based on the beloved characters and adventures from Critical Role’s first tabletop role-playing (RPG) campaign, which was streamed live, The Legend of Vox Machina is an animated fantasy adventure series for adults that follows the Vox Machina, a gang of misfits with a passion for booze and brawling. Desperate to pay the ever-increasing bill, these unlikely heroes end up trying to save the kingdom of Exandria from the dark magical forces. From a sinister fortune teller to a powerful curse, the group faces a series of obstacles that test not only their skills, but the strength of their bond as well.
The Legend of Vox Machina is an Amazon Studios, Critical Role and Titmouse production for Prime Video. The series features the founders of Critical Role and Laura Bailey (The Last of Us: Part II), Taliesin Jaffe (Final Fantasy XIV), Ashley Johnson (The Last of Us), Liam O’Brien (Star Wars: The Bad Batch), Matthew Mercer (Overwatch), Marisha Ray (Final Fantasy XV), Sam Riegel (Teenage Mutant Ninja Turtles), and Travis Willingham (Marvel’s Avengers). The guys from the Critical Role group are also executive producers here, together with Brandon Auman (Star Wars: Resistance), Chris Prynoski (Metalocalypse), Shannon Prynoski (Fairfax) and Ben Kalina (Big Mouth).

Vivien (Bella Thorne) and Roy (Benjamin Mascolo) are two boys with apparently opposite personalities. Vivien is a talented student with a passion for physics and a desire to enter a prestigious American university. She lives her life as a mathematical formula that pushes her to postpone her happiness to the future. Roy, on the other hand, is a problematic boy, tormented by a trauma experienced as a child, which seems to chase him inexorably and continually smash all his dreams. But even the exact sciences have their variables and, as always happens, life manages to weave its events in surprising and unexpected ways.

Time is up stars Bella Thorne and Benjamin Mascolo. In the cast next to them, also Sebastiano Pigazzi, Bonnie Baddoo, Emma Lo Bianco, Giampiero Judica, Roberto Davide, Nikolay Moss, Linda Zampaglione. The film is directed by Elisa Amoruso and produced by Marco Belardi for Lotus Production (a Leone Film Group Company) and Rai Cinema in association with 3 Marys Entertainment and Voltage Pictures.

The Tender Bar tells the story of JR (Tye Sheridan), a fatherless boy who grows up in the smoke of a bar run by Uncle Charlie (Ben Affleck), the most brilliant and original of the bizarre and expansive father figures he meets in the his childhood. As the boy’s determined mother (Lily Rabe) struggles to offer her son opportunities she was denied – and leaves the ruined house of her extravagant and, despite herself, supportive father (Christopher Lloyd) – JR begins to pursue. courageously, though not always gracefully, his romantic and professional dreams – with one foot constantly in Uncle Charlie’s bar.

The Tender Bar is based on the autobiographical novel “The Bar of Great Expectations” by JR Moehringer, and is directed by Academy Award® winner George Clooney. 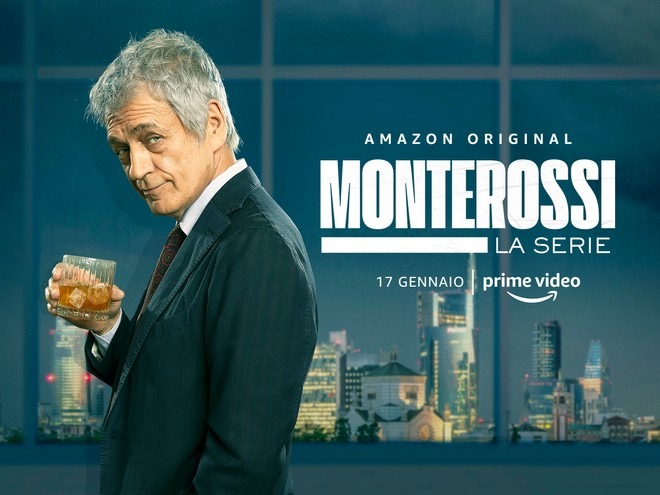 From 7 January exclusively on Prime Video.

Dracula and his gang are back like you’ve never seen them before in Hotel Transylvania: A Monstrous Exchange. Reunite with your favorite monsters for an all-new adventure that sees Dracula on the most terrifying mission ever. When Van Helsing’s mysterious invention, the “Transforming Ray”, goes haywire, Dracula and his monster friends are all transformed into humans, while Jonathan becomes a monster! In their new guises, Dracula, stripped of his powers, and an exuberant Jonathan, enthusiastic about life as a monster, must team up and travel around the world to find a cure before it’s too late, and before driving each other mad. With the help of Mavis and Dracula’s hilarious human gang, the mission is to find a way to get back before their transformations become irreversible. The voice cast of the original version includes: Andy Samberg, Selena Gomez, Kathryn Hahn, Jim Gaffigan, Steve Buscemi, Molly Shannon, David Spade, Keegan-Michael Key, Brian Hull, Fran Drescher, Brad Abrell, Asher Blinkoff; while in the Italian one we find Davide Perino, Cristiana Capotondi, Claudio Bisio, Claudia Catani, Angelo Maggi, Paolo Marchese, Graziella Polesinanti, Luigi Ferraro, Mino Caprio, Luca Dal Fabbro, Stefanella Marrama, Emma Puccio, Anita Ferraro, Sofia Fronzi and Alice Labidi .

We are in Rome, in 2019. It’s hot and August 15th is about to arrive. Marina, a middle-class woman married to an Orthopedics head physician, discovers that her husband is having an affair with her male assistant. The world collapses on her. His bourgeois certainties are shattered. Desperate, she runs to confide in her sister Sabrina who has a clothing store, but finds her in tears too. Her husband, a lawyer, found out that she was cheating on him and decided to leave her. The two sisters thus decide to spend the summer holidays in the villa of Marina in San Felice del Circeo, to find a new balance. Together with them also Lorena, Marina’s young masseuse, also struggling with a sentimental drama. They will then be joined by Caterina, the third sister of Marina and Sabrina. To interrupt the serenity of this holiday, however, will be the arrival of Antonio, the new neighbor who will break the balance of the three sisters …

From January 27th in exclusive preview on Prime Video.

The new French Amazon Original film Flashback follows the story of Charlie, a high-profile, cynical and self-centered lawyer, who after winning another case meets a strange time-traveling taxi driver named Hubert. Taking her back in time from the French Revolution to “Les Trente Glorieuses” and the medieval period, Hubert introduces Charlie to some of the most famous women in history. Through a series of unfortunate but hilarious events, Charlie will witness firsthand the most important historical moments and the battles fought for women to live in freedom in the 20th century. To escape this cycle of time travel, she will have to find out what her role as a woman in society really is and learn how to help empower those who have no voice today.