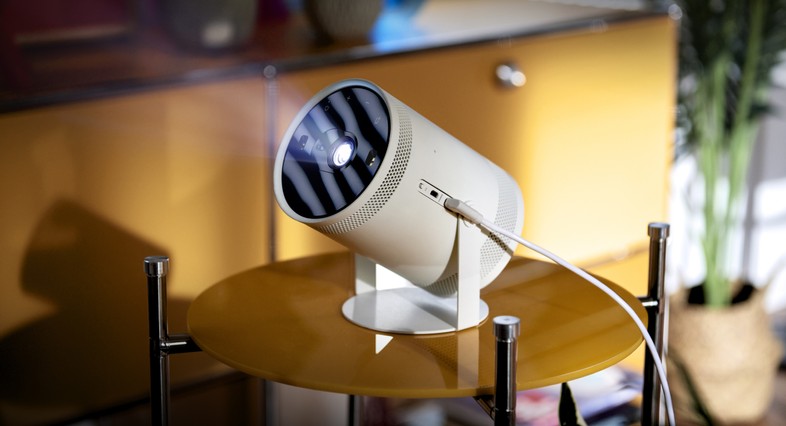 During the press conference at CES 2022, strongly focused on reducing the ecological footprint, Samsung presented The Freestyle, the latest addition to the range Lifestyle TV. The arrival of this product had been anticipated in October 2021: the trademark had already been filed with the European Union Intellectual Property Office (EUIPO).

The Freestyle is a very special projector, completely different from The Premiere, a Lifestyle product announced at IFA 2020. It is in fact a mobility device, with an unusual appearance and capable of performing many other functions. The design is reminiscent of a spotlight, both in terms of color and design and in the table support that allows the light to be directed substantially in any direction, even upwards. It is therefore not surprising that using an accessory it is possible to mount it in place of a light bulb (with E262 connection), so as to project downwards. The power supply is taken directly from the lamp holder.

The Freestyle, codenamed SP-LSP3BLAXXE, measures 104.2 (W) x 172.8 (H) x 95.2 (D) millimeters and weighs approximately 830 grams. Under the shell with a white livery there is a heart made up of a chip Full HD resolution DLP. The lighting system of a LED guarantees a maximum luminance of 550 LED lumen.

We need to clarify this data: LED lumen is a measurement that is often associated with compact LED projectors. The data is not directly comparable with ANSI lumens since it is quantified differently. LED lumens take into account the so-called Helmholtz-Kohlrausch (HK) effect, which takes into account the increase perceived by the eye as a result of very high color saturation.

Samsung declares an estimated life of at least 20,000 hours of operation and a noise level of 30 dB (A). It can be projected on surfaces from 30 “to 100” although it will almost certainly be preferable not to get close to the maximum. The lens has a 1.2: 1 shooting ratio which translates into the following distance about the screen:

The Freestyle processes images via the Crystal Engine, is compatible with HDR10 and has Auto Motion Plus to improve motion. All the corrections necessary for the focus, to level the image and eliminate distortions (through the keystone) act automatically. 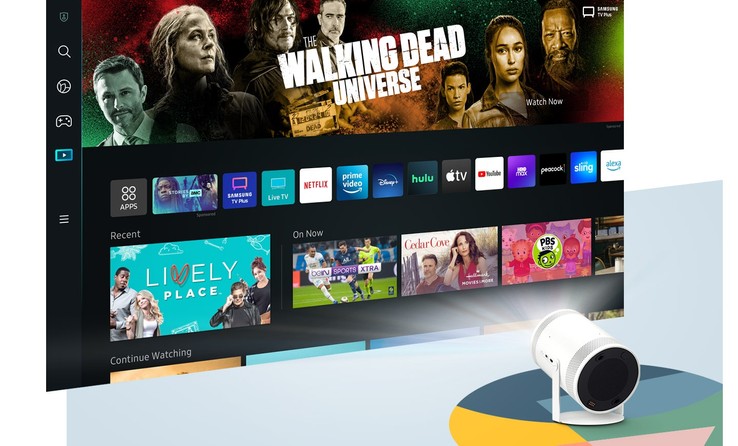 The Freestyle can also act as a wireless speaker to listen to music. The internal speaker spreads the sound at 360 degrees with a power of 5 W RMS. The Bluetooth Low Energy 5.2, multi-room and even video listening in Dolby Digital.

The multimedia capabilities also include other functions: the projector can create lighting effects, show effects or graphics, photos, etc. via the ambient Mode. For example, you can transform a wall into a glimpse of New York or draw the word “happy birthday”. All this with maximum versatility thanks to the ability to orient the images even on the ceiling or on the floor.

Like all products in the Lifestyle range, The Freestyle is also equipped with Smart TV Tizen. The user can use the web browser, download the available applications, including more or less all the main streaming services, interact with their voice via Bixby And Alexa or send content from your smartphone. To pair mobile devices, simply let them touch anywhere on the projector.

Those who do not have white walls can compensate for the effect of colored walls thanks to Smart Calibration, which automatically adjusts the image to obtain the best possible rendering. To use the aforementioned function, it is necessary to install the SmartThing app on a Galaxy S, Note, Z Flip, Z Fold smartphone marketed from 2019 onwards, or an iPhone released in the same years.

Available connections include an input Micro HDMI with ARC, Wi-Fi 5 and a door USB-C for power. Samsung requires a power bank with support for USB-PD and an output of at least 50 W / 20 V. Note that the microphone can be deactivated via a hardware switch. The list price is set at $ 900. In Italy the availability is given for February.