The new ranking of popular browsers for smartphones and mobile devices it is not surprising then, at least looking at the first place where the dominant is, as always, Google Chrome. Further back the fight is a bit tighter between Safari and Samsung Internet Browser but it is easy to guess winners and losers, both globally and in Italy. That’s all.

After seeing the situation regarding desktop browsers, it’s time to focus on the ranking of the most popular browsers for smartphones and mobile devices. The data comes from StatCounter GlobalStatsentity that took the time interval into consideration between January 2021 and January 2022.

The global market of the mobile sector is clear: Google Chrome leads the ranking with 62.06% share, followed at a great distance by Safari which, with 26.71%, secures second place. Samsung Internet Browser closes the podium, with a 5.26% share, substantially stable over the months, followed by Opera and UC Browser, almost tied: 1.89% and 1.57% respectively.

The ranking of the most popular browsers for mobile on mobile.

By restricting the analysis to only Italian market, the situation changes but only in part. Who dominates is always Google Chrome with a 63.65% of the total share. In second place is Safari with 27.14%, followed by Samsung Internet Browser with 7.22%. They close with substantially the same slice, less than 1%, Firefox, Opera and UC Browser: 0.57%, 0.47% and 0.27% respectively. 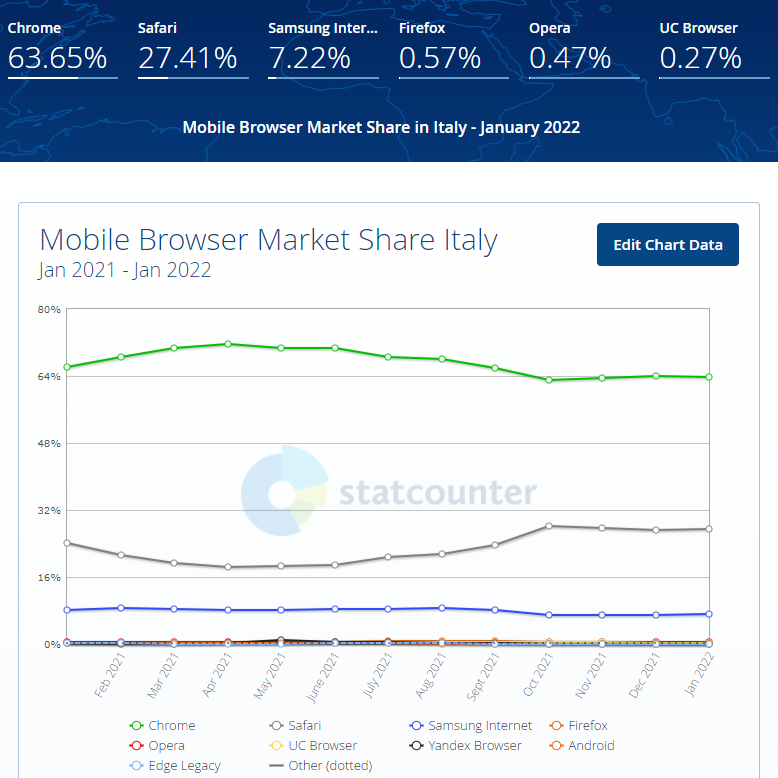 The ranking of the most popular browsers on mobile in Italy

Beyond weaknesses and preferences, this is what the aforementioned institution has revealed, which has once again confirmed a dominance that seems to be unchallenged as usual.