Ericsson just released the Mobility Report relating to 2021, a document that offers a lot of interesting data on the state of telecommunications globally. The first macroscopic information concerns the number of active SIMs in the worldwhich at the end of last year amounted to 8.2 billion in total, with an increase in mobile network subscriptions which in Q4 2021 alone grew by 24 million units.

THE NUMBER OF SIMS EXCEEDS THAT OF THE WORLD POPULATION

This means that the number of SIMs in circulation exceeds that of the world human population: the penetration rate is in fact 104%, and this phenomenon is attributable to those users who use more than one SIM, since the figure for single subscribers is instead of 6 billion.

The largest contribution in the last quarter came from China (+5 million), closely followed by the United States (+4 million) and Pakistan (+3 million).

And at the same time, the use of the internet on the mobile network could only be growing, with mobile broadband subscriptions increased by about 80 million, again in Q4 2021, thus reaching share 6.9 billion and marking a 6% year-on-year increase.

While Ercisson innovates current technologies and already thinks and works on 6G, the world is still engaged in the transition to 5G. The data referring to the end of 2021 photograph a scenario where 5G subscriptions reached 660 million on a global scale, with a growth of 98 million. There are 200 operators that have launched 5G services in the year we have left behind, and at least 20 have implemented standalone 5G networks.

As for the LTE subscriptionsthe increase in the last quarter is equal to 37 million subscriptions and brings the total to 4.7 billionor 57% of the pie of all mobile subscriptions. As expected, subscriptions to the HSPA and GSM networks alone, respectively -31 and -52 million, are on the other hand. 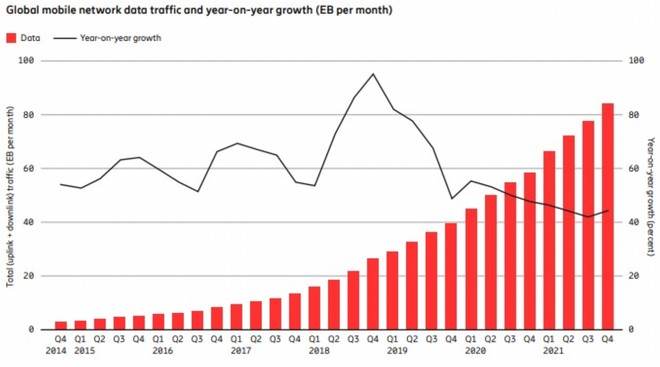 Finally, it naturally also rises amount of mobile data traffic, driven by the pandemic, by a greater consumption of videos and obviously by the increase in subscriptions that provide access to the internet on the move. The figures speak of 80 Exabyte achieved in Q4 2021 and a growth of 44% on an annual basis comparing the figure with that of Q4 2020, while the quarterly one is 8%.