At the Tech Summit of Qualcomm, during which the company unveiled the Snapdragon 8 Gen1, six demo stations were available that allowed them to explore the capabilities of the next-generation top-of-the-line mobile SoC. Colleagues from xda-developers illustrated them in an article published just now; We propose it again below. It should be noted that they are all concept technologies: it is not certain that we will see them in an upcoming smartphone or software.

PANORAMIC PHOTOS IN ONE SNAP

One of the most interesting demo stations allowed to demonstrate the potential of the new ISP of the chip associated with a very special camera, with a field of view of 140 ° – 20 ° more than the most extreme ultra-wide angle on the market. As the title says, you manage to capture a panoramic image in one shot, removing the need to stitch consecutive frames together – a practice that can cause pretty funny artifacts, as we know.

Not many specifics of the module are known. We know that the images are saved to 16 MP and that it is possible, at least in theory, to also record videos, which however were not enabled in the demo unit

There Secure Boot technology of the new chip ensures that the NFT created is authentic, unique, and original. The demonstration station included an electronic keyboard through which it was possible to play a melody and authenticate it as a secure NFT.

Thanks to the security chips of the SoC, the system can warn if the smartphone has connected to a suspicious cellular network. The demo station showed a device connected to a fraudulent cell phone station sending a fake message from a bank, inviting them to click on a link bragging about security issues with their account. The link would then install a fake bank app. The device can verify in advance that the network is not secure, notify the user and then block the receipt of messages. 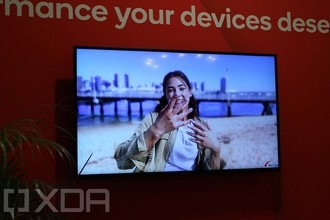 It is a technology that, at least from a conceptual point of view, is now quite well known; and thanks mostly to Snapdragon 8 Gen 1’s next-generation AI chip is more and more precise and realistic.

QUESTIONS AND ANSWERS WITH AI

Among the partner companies of the initiative was Hugging Face, which specializes in the understanding of human language by machines. The demo allowed the user to ask questions about a portion of text visible on the screen; with Snapdragon 8 Gen 1’s AI Engine enabled, the answers came practically instantly. The technology could be used for example to search a manual or a study book (“How do I change the car’s brakes?”).

This demo allows you to create slow-motion videos, thanks to the AI ​​that generates the missing frames. If a video is recorded at an inadequate frame rate, for example, 30 or 60 FPS, slowing it down will inevitably become jerky; but if the artificial intelligence constructs the missing frames, the video will turn out perfectly smooth, as if it were recorded at 120 or 240 FPS.