The apocalyptic, hostile world, the dusty atmospheres and the rust of Mad Max, the loneliness of The Martian or even better (remaining within the filmography of Tom Hanks) that of Cast Away, broken only by the company of a dog and a robot that is the protagonist himself, Finch, to create: a sort of tin Pinocchio. 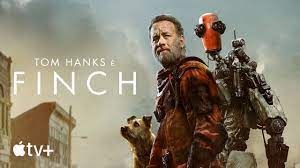 These are, in short, the basic ingredients of the film that is halfway between the road movie and science fiction: and in fact, the behind the scenes focuses, among other things, on a “silent” but crucial protagonist, namely the camper that plays the dual role of a means to go adrift and refuge. A focus on the actor’s proof of the dog, Seamus, could not be missing, but also of the actor (Caleb Landry Jones) called to interpret the robot, and then “deleted” from the computer graphics.

If the backstage is not enough for you, and you have not yet seen the film, we remind you that Finch as mentioned is an Apple TV + exclusive, and therefore to be able to see it you need to sign up for a subscription to the platform: the first week is free, and then yes. activate the cost of 4.99 euros per month (if you have purchased an eligible Apple device, however, then you are entitled to 3 months of subscription as a gift).