The delivery of goods by drones is getting closer and closer. To tell the truth, it is already a reality, including Europe: see the experiments underway in the United Kingdom, or the Wing (Google) service active in Helsinki to bring food home. But the story of FlyingBasket is different, partly because it touches us closely, partly because it demonstrates how the carrying capacity of drones has great potential, even in an urban setting.

We are talking about one reality-based in Bolzano, for years a leader in air transport using drones for industrial purposes in the logistics, energy, and telecommunications sectors. And the experimentation took place recently in Turin in collaboration with Leonardo and Poste Italiane it can truly be considered a record. Or at least a new beginning that will allow us to eliminate from the streets thousands of vehicles currently used daily for deliveries – with the approval of those who get stuck in traffic and our lungs. 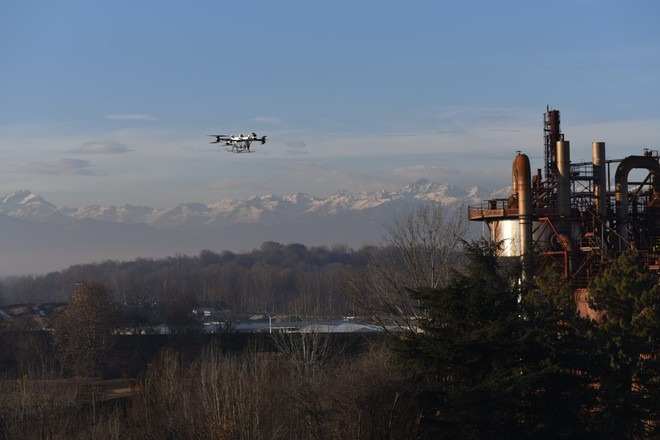 They have been employed two eVTOL FB3 cargo drones, each capable of bearing a weight up to 100kg. The first carried a load of “just” 26kg inside a container, the second was equipped with a retractable hook to be able to test the delivery of the goods (26kg also in this case) without the need to land the drone. These are two alternative solutions that can be used depending on the characteristics of the place of delivery.

The delivery was made 3.9km away by flying both drones over the Stura di Lanzo river. It was important experimentation in modality BVLOS (Beyond Visual Line of Sight), i.e. completed without direct and visual contact with the medium. The test was conducted with the operational authorization issued by ENAC, which recognized the operation of FlyingBasket drones as reliable even in an environment such as the urban one of Turin.

It, therefore, seems to be promising future of deliveries via drone: Italy, with its know-how, is at the forefront of Europe, demonstrating how even heavy loads can be transported by air in maximum safety in an urban environment. 26kg is just a quarter of the maximum capacity of FB3 cargo drones, and there is also room to think that in the not too distant future this limit could be pushed further, beyond 100kg.