There is now less than a week before the launch of the new family of top-of-the-range Samsung smartphones, which includes Galaxy S22, Galaxy S22 Plus, and Galaxy S22 Ultra. The rumors that have emerged so far have allowed us to trace a rather precise identikit of the devices, but it is interesting to dwell for a moment on the eternal Exynos VS Snapdragon debate. As we know, expectations are high this year for the SoC developed by Samsung, due to the debut of the GPU developed in collaboration with AMD and based on RDNA2 architecture, the same as the latest generation Radeon GPUs.

Mixed rumors about performance have been heard so far. Some indicate that the Exynos 2200 is superior, others unquestionably put the Snapdragon 8 Gen 1 ahead. Both solutions have appeared on different benchmark platforms at this point, and on Geekbench it is possible to have a direct comparison between the two variants of the same device – specifically the Galaxy S22 Ultra. 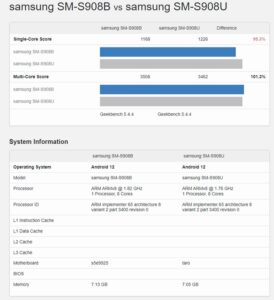 Summarizing to the maximum, it is seen as the model with Exynos chip is advantageous in single-core operations, while the Snapdragon model has the advantage, but to a much lesser extent, in multi-core operations. In both cases the variations are however very subtle – most likely even impossible to distinguish in everyday use. Going to analyze the individual items that make up the two tests, however, they are noticed more marked discrepancies and some voices in countertrend: For example, the Exynos model is superior in the navigation test in both single-core and multi-core, with gaps of up to 10%. Samsung’s chip also performs much better in speech recognition and text compression (again, both single and multi).

Snapdragon 8 Gen 1 does not win even one of the comparisons in single-core, and in the multi gets mixed results – in some, as we have said, it lags, in others, it is substantially comparable, and in several others, it has a considerable advantage, such as text rendering, ray tracing, machine learning and operations on the SQLite database.

It is fair to point out that these are tests derived from units not yet released in public and therefore some hardware and software aspects may not be finalized. Energy management profiles with different specifications could also be implemented. We will know more in the coming weeks, we hope.