The news that 2022 will reserve for Disney + subscribers was just a taste, now it’s time to see what the new year will bring us also on Netflix. We have prepared an updated article in which you will find the films and TV series to be released in January, and although the list is still subject to some changes some awaited productions are worth considering, such as the fourth season of Ozark, and much more that we invite you to read in the list below. Enjoy the reading!

A new take on the iconic young adult soap opera Rebelde returns to the Elite Way School (now EWS), the international boarding school that gave birth to the legendary RBDs. Now a new generation of students is enrolling in the school dreaming of participating in its prestigious music program and winning the Battle of the Bands to become music stars.

Welcome to EWS, the prestigious college where the arduous path to fame is not for everyone. Rebelde is the reboot of the popular teen soap opera that spawned two different soap operas in Argentina and Mexico in the early 2000s. Santiago Limón and Yibran Asaud direct the series that takes place in the corridors of the Elite Way School with a new generation of students, stories and characters (plus a bunch of familiar faces fans will recognize). Over the course of eight episodes, Rebelde follows a group of students who go to great lengths to win the EWS Battle of the Bands, the race that could kickstart their musical career. Over the course of events, loves and friendships blossom as a mysterious secret society tries to thwart everyone’s dream of becoming the next music star. 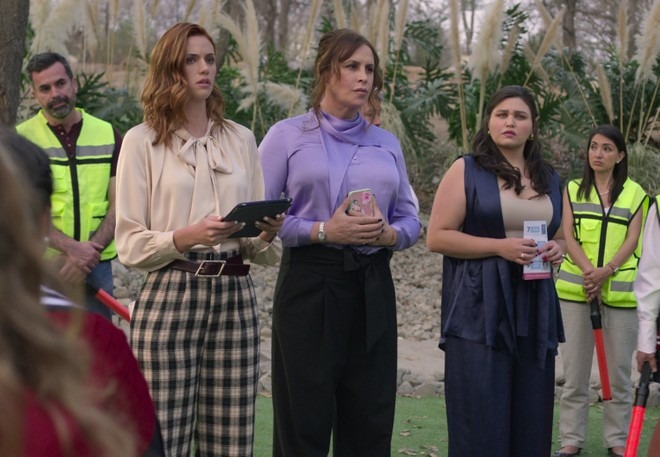 Adaptation of the 2019 feature film of the same name that has caused a great deal of hype for having turned the spotlight on the crimes and political scandals of recent years in Japan. The bewildering description of social taboos, compelling storytelling and elegant visuals earned the film a win in three of the main categories at the 43rd Japan Academy Awards, including Best Picture of the Year. The feature has also received numerous other film awards. Ryoko Yonekura (Doctor X, Legal V) plays Toto Newspaper reporter Anna Matsuda in this new series. The protagonist is known as the media maverick and works tirelessly to shed light on the problems of modern Japanese society. The series is directed by the same director of the film Michihito Fuji.

Archive 81 – Alternative universes follows the archivist Dan Turner (Mamoudou Athie), who accepts the assignment to restore a collection of damaged videotapes dating back to 1994. When he finds himself reconstructing the work of documentary maker Melody Pendras (Dina Shihabi), he becomes involved in his investigation of a dangerous sect based in the Visser condominium. The season continues on parallel periods as Dan becomes increasingly obsessed with what happened to Melody. When the two characters form a mysterious bond, Dan is convinced that he can save her from the horrible end she suffered 25 years ago.

The House is an eccentric dark comedy about a house and the three surreal stories of the individuals who inhabit it. This anthology is directed by the leading voices of independent stop motion animation: Emma de Swaef, Marc Roels, Niki Lindroth von Bahr and Paloma Baeza. Production is being handled by Nexus Studios.

TOO HOT TO HANDLE S3

The new year has arrived and even if it is snowing outside, the third season of TOO HOT TO HANDLE is more sensual than ever. Here is a new gang of horny babes in what they believe will be the sexiest vacation of their life. But under Lana’s stern eye, will this unleashed cast succeed in following the rules by avoiding any kind of sexual contact (or autoeroticism) to create meaningful bonds and keep the prize pool as high as their desire? The tension is sky high, because this season the stakes are very high: the prize at stake is the greatest ever.

After the fire of San Onofre, the fates of Pastor, Mario Borges and Diosito cross again in the prison of Puente Viejo. The meeting between Pastor and Diosito will awaken strong feelings in both. César, who has been transferred there, joins this confrontation and leads the group representing Sub21. From the outside, Sergio Antín will manage things to seize power of the prison, confronting the current director. And Emma Molinari will work to help Pastor in a new and dangerous escape attempt.

This is a show about the food that Mexicans hate and love at the same time, that is those flavors that are worth the stomach pains that will most likely come after their consumption. An ode to those things we’re willing to eat, no matter how much the recipe gets out of control.

Ozark is an immersive modern-day drama that chronicles the Byrde family’s journey from quiet life in the Chicago suburbs to dangerous criminal activity in Ozark, Missouri. The series analyzes capitalism, family dynamics and survival through the eyes of an ordinary (or almost) American family.

One of the most famous and paid athletes in history seen from a unique perspective. NEYMAR is a hero in the stadium and a controversial figure off the pitch. This three-part docuseries directed by David Charles Rodrigues explores in detail the story of star Neymar da Silva Santos Júnior, from his rise with Santos to his glory days in Barcelona, ​​to his twists and turns in Brazil’s national football team. and in Paris Saint-Germain. In addition to revealing the secrets of Neymar’s marketing strategy, wielded by his father, this star-studded series of footballing boasts interviews with Beckham, Messi, Mbappé and many other football legends, reflecting on Neymar’s role in sports history.

The story begins in 2045, when artificial intelligence has made great strides and anyone can travel in space. In the Japanese space station Anshin some children born on the Moon meet others who come from Earth. The series consists of six episodes and will be distributed worldwide.

For the disconsolate Anna (Kristen Bell) the days are always the same and she spends them in the company of wine, staring out the window as she watches life go on without her. Until a charming neighbor (Tom Riley) moves across the street with his lovely daughter (Samsara Yett) and Anna begins to see the light at the end of the tunnel. But then he witnesses a horrible murder … o maybe no? From creators Rachel Ramras, Hugh Davidson and Larry Dorf, The woman in the house opposite the girl by the window is a dark humor, high alcohol and satirical version of the classic psychological thriller that keeps you in suspense until the very end. Michael Ealy, Mary Holland, Shelley Hennig, Cameron Britton, Christina Anthony and Benjamin Levy Aguilar star alongside Bell, who also executive produces the miniseries with Will Ferrell, Jessica Elbaum and Brittney Segal (Gloria Sanchez Productions).

That for every person there is a soul mate is a very romantic but perhaps unscientific theory, and for Luca and Sara the temptation to test it is strong. But above all, this soul mate, how is she made? Does it look like us or is it our opposite? This is how, almost as a challenge, the two invite four friends who, coincidentally, are single to dinner: Chiara, Matteo, Giulia and Dario.

“Four Halves” is a romantic comedy that tells the stories of four characters and the four couples that they could form into two possible alternate realities. Who will fall in love with whom?

The authoritative mystery writer and crime expert Grace (Alyssa Milano) rushes to the family home in Washington at the invitation of her sister, with whom she had lost contact. When the latter is murdered and her double life as a web performer comes to light, Grace ignores the warnings of staid detective Ed (Sam Page) and gets involved in the investigation. Based on the novel “Desire runs on the wire” by Nora Roberts.

An Irish boy named Keegan and a Spanish girl named Moya travel to the mythical world of the Megaloceros Giganteus who teach them to appreciate Riverdance as a celebration of life. Inspired by the global stage sensation and new music of Grammy winner Bill Whelan.

New York hairdresser Izzy is hired at the wedding of a charming prince, but when the spark strikes between them, will love or duty win? Isabella owns a hairdressing salon and always says what she thinks. Prince Thomas is the head of a nation and is about to marry in a marriage of convenience. When Izzy has the unique opportunity to work on the hairstyles for the royal ceremony with her colleagues, she and the prince will discover that to fulfill one’s destiny one must follow the heart.

Two years after winning the Super Bowl, NFL manager Sean Payton is suspended from the business and returns to his hometown to find himself and re-establish a bond with his 12-year-old son by becoming the coach of his football team.