The first rumors about Realme GT 2 Pro date back to the beginning of the month, when we reported part of the technical equipment on the basis of the information anticipated by the rumors at that time. The adoption of the Snapdragon 888 Plus chip was rumored, before a few days ago the prediction was denied by AnTuTu, where an alleged example of Realme GT 2 Pro showed very high profile performances by virtue of the Snapdragon 8 Gen 1 that it will be made official tomorrow.

Now thanks to the work of Steve Hemmerstoffer, alias OnLeaks, which has entrusted its previews to the portal 91mobiles, we come into possession of the first-ever render of the next top of the Realme range, which in the meantime has also confirmed the name GT 2 Pro. And the design that emerges is surprising due to the similarity with Nexus 6P (designed in 2015 in collaboration with Huawei, remember?).

For the Realme GT 2 Pro camera group, the designers would have been inspired by the solution designed by Huawei for one of the latest smartphones in the Nexus range, a rear horizontal “band” well connected to the surface that, to tell the truth, the designers of Realme seem to have interpreted in a better way, obtaining a decidedly harmonious visual impact. One might say “good Realme” if it were not a rumor. 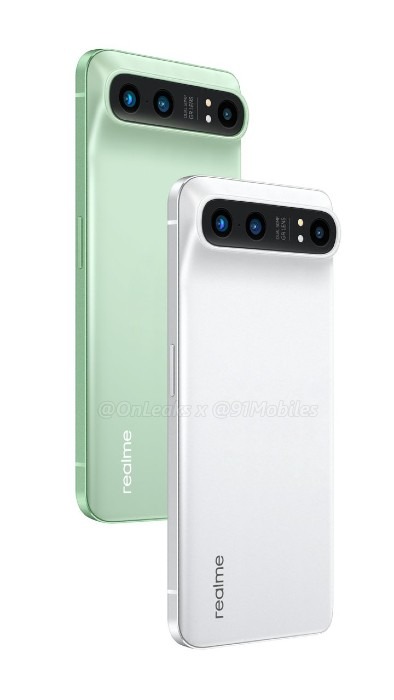 Within the horizontal group of Realme GT 2 Pro, there would be three cameras and two LED flashes, for which some would be used GR Lens Ricoh: Quality lenses improve shots by reducing the number of reflections they are subjected to, reducing ghosting or lens flare. Of course, the realization is more demanding on an economic level and the smartphone will have higher costs than a model with traditional lenses, but obviously, the intention of Realme would be to offer a top-of-the-range to all effects, also and above all on the multimedia level.

According to information from OnLeaks, the rear surface of Realme GT 2 Pro would be made of ceramic while the metal frame, probably aluminum. No image for the moment of the opposite surface, but it is suggested that the bezels around the display would be well optimized and the selfie camera would be integrated inside a hole. Below are the alleged technical specifications of the Realme GT 2 Pro that we are aware of so far.

These are the specifications suggested in the past few hours by OnLeaks, while previously it was also said of:

THE MOST EXPENSIVE REALM EVER

The well-known informant reports that Realme GT 2 Neo will be the most expensive smartphone ever marketed by Realme: a starting price of 799 dollars, high relative to the habits of the Chinese company but understandable in light of the Snapdragon 8 Gen 1 chip and the photographic quality that Realme seems to want to achieve even with the help of Ricoh.