If this year Samsung has strongly renewed its line of smartwatches with Galaxy Watch 4 and Galaxy Watch 4 Classic which marked the historic abandonment of the proprietary Tizen platform for the return to WearOS, as we explained in our review, in 2022 it could instead be the turn of an important innovation from the hardware point of view. 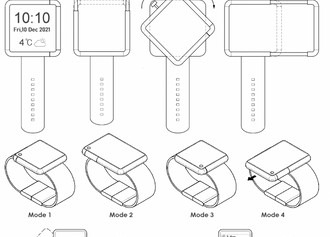 This concept in fact emerges from ben two patents deposited by the Korean giant at the WIPO (World Intellectual Property Office) and approved in recent days by the regulatory body.

The basic idea is simple: apply to clocks the same technology that Samsung plans to bring to smartphones, and that allows displays to roll up thus increasing or shrinking its diagonal. And so we are talking about the concrete possibility that Samsung will bring on the market in the future rollable smartwatch.

The models shown by the patents are two, with the basic concept that unites them, but some fundamental differences. The first, which is also the most visible, is the different shape of the cash desk: in one case round, in the other square. But if that of the square device can also rotate, changing orientation and thus allowing you to choose in which direction to extend the screen, the same does not apply to the round one. Samsung is also thinking of equipping both smartwatches with one small camera.

The illustrations contained in the documents seem a lot detailed and show that there is evidently a serious intention on the part of the company to attempt this direction for the future. In fact, the sketches are not limited to evoking a concept but go into the detail of the mechanisms behind this solution, and moreover, they also offer different options to manage the transition from one state to another of the display, with gestures on the screen or interactions with the keys that roll up or unroll the screen.

Having said that, however, it should be specified that the existence of patents, as always, does not imply the subsequent one of the products described: but in this case more than in others the clues seem to describe a concrete possibility. Of course, perhaps 2022 will not be the right time, and it could take more time: at the moment we don’t know.