Realme slowly begins to reveal some of the GT 2 Pro key content, the smartphone that rumors have tried to anticipate far and wide also on an aesthetic level and which is thought to be presented in the first weeks of 2022. And it did so by spicing up expectations. Realme GT 2 Pro should be the most expensive product ever made from Realme, but to hear the advances of the company could be worth it.

The probable “pill” difficult to swallow, that of the price, will be gilded by three unique features that have been unveiled and described in advance at the Realme GT 2 Series Event: the rear surface of the Realme GT 2 Pro will be made in an innovative bio-polymeric material, will have a “really” ultra-wide-angle camera and also the innovation Forward Communication. 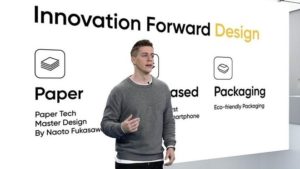 Ford GT 2 Pro, Realme promises “a minimalist and sustainability-oriented design” to get to which the Japanese designer Naoto Fukasawa (former father of Realme GT Master Edition) drew inspiration from the paper, and which was therefore called Paper Tech Master Design. The back surface was made with a polymer of biological origin to avoid resorting to raw materials of fossil origin and therefore contribute to the climate.

The bio-based material SABIC – says Realme – has passed not only the International Sustainability and Carbon Certification (ISCC), but also various stringent environmental regulatory standards, such as REACH, RoHS and EPEAT.

Realme GT 2 Pro, according to the company, will be the first smartphone in the world to incorporate bio-based materials, and always to contain carbon dioxide emissions its packaging uses just 0.3% plastic, a drastic reduction from the 21.7% of the previous generation’s packaging.

Another first for Realme GT 2 Pro, which when it arrives on the market will be the first smartphone to have an ultra-wide-angle camera 150 degrees of field of view, when on average, so to speak, it is about 120 °. For percentage lovers, this is 278% more than the 84 ° main sensor field of view, which translates into greater possibilities to frame very large objects.

This great ability to capture multiple elements prompted Realme to develop the fish-eye mode, by images “even more visually attractive”.

Realme GT 2 Pro will also be equipped with an Antenna Array Matrix system consisting of three technologies. There is one for the antenna switching HyperSmart which consists of 12 antennas “wraparounds that cover all sides of the phone and support major bands in nearly all directions, all with the same signal strength” so that Realme GT 2 Pro can from time to time choose the antenna to which the better signal.

Then there is the Wi-Fi Enhancer to get to which Realme has adopted a symmetrical Wi-Fi antenna: some internal tests have revealed a 20% increase in signal stability compared to a traditional asymmetrical Wi-Fi antenna. And finally Realme GT 2 Pro will have the360 degree NFC, obtained by using the two antennas on the top of the smartphone in dual mode, which is therefore capable of hooking up the cellular network but also of receiving and transmitting the NFC signal.

So, says Realme, he got a 500% detection area increase and it will be possible to communicate with enabled devices up to a distance greater than 20% compared to traditional systems. Realme GT 2 Pro, therefore, seems to be promising, at least judging by what the young Chinese brand is filtering: appointment in the first weeks of 2022 for partial verdicts (for the final ones, a review will be needed).