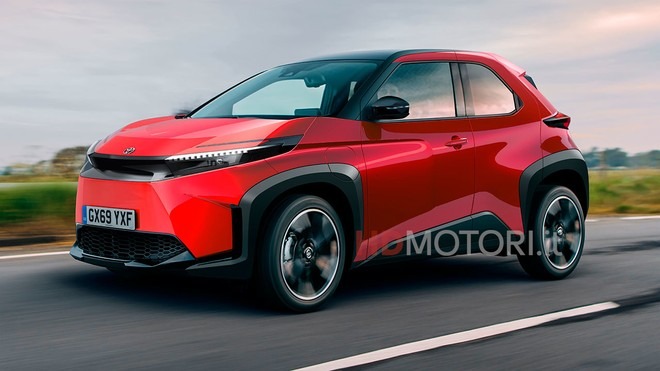 Toyota had announced in December an important acceleration of his electrification plans, showing a series of electric car prototypes with plans to bring them to market over the next few years. The Japanese carmaker’s goal is to get to cover all market segments. The first model to debut, as we know, will be the Toyota bZ4X SUV which will arrive in Europe in the course of 2022.

Among the prototypes shown there is also a small crossover for the city which eventually could be called Toyota bZ1. It can be seen as a sort of electric heir to the current new Toyota Aygo X. Starting from what Toyota showed, we tried to imagine what the look of this small urban electric crossover could be in the end. The result is the render that you can see at the opening.

The proportions will be similar to that of the Toyota Aygo X but the electric model will be able to count on a look with more personality and not very far from that of the prototype shown recently by the Japanese brand. The front will do without the grille, given the absence of the internal combustion engine. The front will also be characterized by the presence of LED headlights with a slim design. Despite its compact size, the passenger compartment should offer ample space thanks to the use of thee-TGNA platform designed specifically for electric cars and on which all future Toyota battery models will be born.

Obviously,,, there is no precise information on the powertrain but it can be assumed that the car will have a single electric motor powered by a battery with a capacity between 35 and 45 kWh. The autonomy could be around 300 km. A model that could become an interesting alternative for those looking for a compact car to be used mainly in the city.

With the market appreciating more and more models with SUV / crossover shapes, the Toyota bZ1 could have success. Of course, it will depend a lot too on the selling price. To see it on the streets, however, we will have to wait several more years.