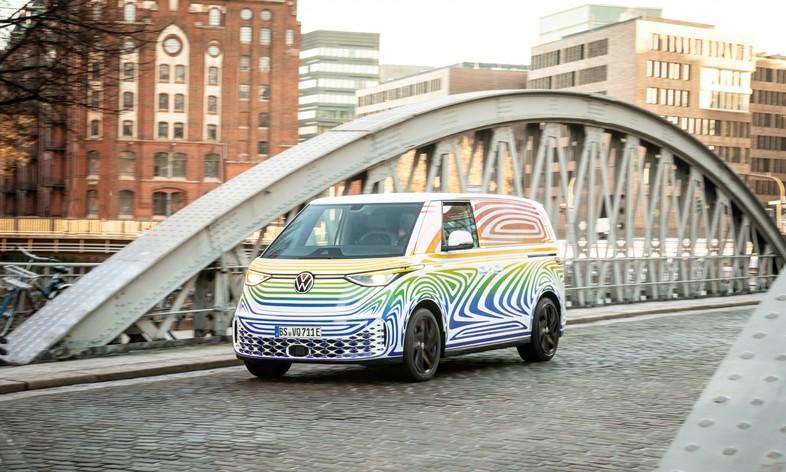 The debut of the Volkswagen ID. Buzz you are approaching. On March 9, the new Multivan that is seen as the electric heir of the legendary Bulli will be officially unveiled. At that point, we will finally be able to discover all his secrets of him. In the meantime, the German car manufacturer wanted to share some further information on this new, highly anticipated battery model that we have talked about several times over time.

At the same time, he also published a series of new images of the ID. Buzz albeit still with a slight camouflage. The manufacturer says that, currently, a pre-series fleet of the electric Multivan is traveling across Europe. These are the final tests carried out in daily use conditions between Barcelona, ​​Paris, London, Amsterdam, Copenhagen, Hamburg, and Hanover.

The start of production of the ID. Buzz will take place from the first half of the year, while the launch on the European market is expected as early as autumn (September). 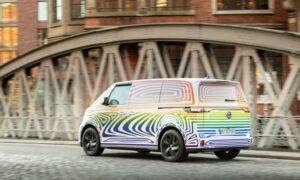 The new electric Multivan will be offered in two versions: Volkswagen ID. Buzz and Volkswagen ID. Buzz Cargo. We had already had the opportunity to see the design closely several times, also thanks to a series of spy photos that arrived over time. The German manufacturer says its new electric model features a look that encompasses both elements of the 2017 concept and stylistic details of the original Bulli. And just like the original Bulli, also the ID. Buzz has rear-wheel drive.

This new model rests on the well-known MEB platform. The brand then explains the version’s ID. Buzz and ID. Buzz Cargo with a normal wheelbase (2,988 mm) that debuted in 2022 has a length of 4,712 mm. The ID. Buzz offers an internal length comparable to that of the T6.1. The passenger transport version is 1,937 mm high, while the van version is 1,938 mm high. Both IDs. Buzz is 1,985 mm wide (without exterior mirrors). Available will be alloy wheels with dimensions between 18 and 21 inches.

There will be a lot of space inside. Even with all seats occupied, the ID. Five-seater Buzz can count on up to 1,121 liters of luggage volume. The maximum load capacity of the ID. Buzz Cargo with bulkhead behind the first row of seats measures more than 3.9 cubic meters.

Volkswagen has also provided some initial indications on the powertrain that we will find on the new ID. Buzz. There will be a 150 kW (204 hp) engine with 310 Nm of torque. The maximum speed is electronically limited to 145 km / h. Powering the engine is a 88 kWh battery (77 kWh usable). Autonomy has not yet been communicated.

The Multivan will be able to count on smart solutions thanks to the latest version of the ID software. In the future, the range will also offer the Plug & Charge function. In this way, at some direct current columns, the ID. Buzz will be able to authenticate and start charging automatically without the need for cards or apps. In addition, there will be an additional new feature: bidirectional charging. Of course, this model will also support OTA updates which will allow you to receive new features.

As for the ADAS, the range includes solutions such as the new Trained Parking (automated entry and exit from car parks), Car2X (short-range warning and danger messages), and the latest version of the Travel Assist; the system allows semi-automatic control of lateral and longitudinal dynamics throughout the speed range.