All the color variants of the heart emoji will be animated on WhatsApp, not just the red one: this is what the WABetaInfo guys discovered. As you know, there are several colors for the Heart Emoji in the current official set – red, orange, yellow, green, blue, purple, brown, black, and white. But only the first is “translated” by WhatsApp as an animated icon. That won’t be the case in the future – when it’s hard to say, but let’s put it this way: it doesn’t seem like a feature too hard to develop, so we wouldn’t be surprised if the release times, even in the Beta channel alone, are reasonably tight.

A new update is planned at a later date to support animating all heart emojis, on WhatsApp beta for Android and iOS.https://t.co/SXQniNlOeH 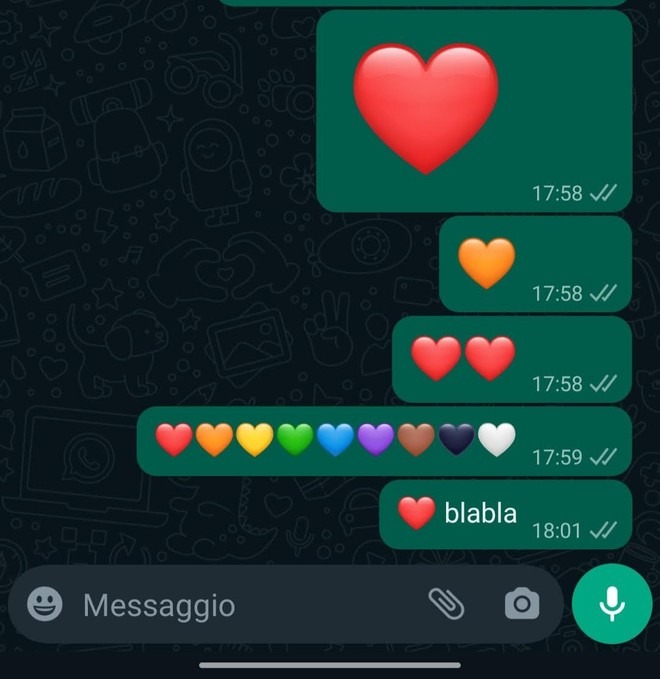 To clarify: the reference is when you send a text message containing only that emoji. If it is a red heart, it is enlarged and there is a pulsating animation, barely noticeable. This only occurs if the message contains a single red heart: it does not work if there are two or more red hearts, a red heart, and red hearts of other colors (or other Emoji or other text. Here is the example (the image is static so you don’t see the animation, but the concept is quite clear).

We remind you that, more or less on a theme, in recent weeks traces of work in progress have emerged for the implementation of reactions to messages, a function born on Facebook and which is now very common on several other platforms. Six reactions that can be applied – thumbs up, laughter, surprise, sadness, thank you, and, indeed, love with the heart Emoji. This week alone, however, it emerged that the company is working on a major redesign of the audio-only voice call interface and a clearer indicator that end-to-end encryption is active in calls and conversations, group and not.