Auction house Christie’s has put the first version of the Wikipedia homepage up for sale as an NFT created by Jimmy Wales, one of the co-founders of the website, at the time he was starting work on the project. The bids can be submitted until December 15th, when the highest bid will take home a piece of the history of the internet. The amount raised will then be donated to WT. Social charity, a charity run by Wales himself.

In addition to the testimony value, the page can actually be consulted by anyone (found in the link in Source): users can modify it – as per tradition on Wikipedia – but after five minutes it will return to its original form. This is in Wales’ plans, but the owner of the NFT, which is Ethereum based, will be able to choose what to do with it in the future: change the writing that will be in front of those who visit it, pause the possibility of editing it or even send everything offline.

“My idea is not only to create an NFT that celebrates a moment of the past but to recreate the experience lived in that moment: here it is Wikipedia, ready to be edited. What to do with it? How will it become? Can it change the world?“: thus explained the Wales initiative that at the same time as the web page, he also put up for sale the pink iMac that he was using at the time to work. An alternative for those looking for something more physical. 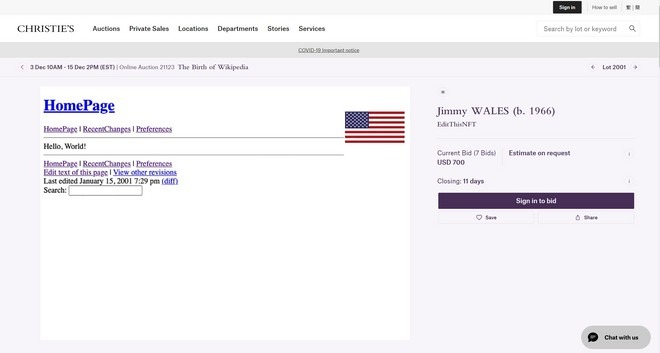 This is a rather similar initiative to the one that, last July, led to the sale of the first web page ever for 5.4 million dollars.